SO WHO’S BEEN DOING ALL THE DIGGING?

Much research has been carried out by concerned doctors and scientists in relation to 5G and its effect on the health of people, animals and the environments. And more reports are coming out via citizen media of the effects 5G is having on people’s health.

Please find below a selection of articles and videos for your perusal.

If you find any other links that may be useful, please send them to us on the Contact Page! Thanks for your contribution.

-From Satya Vijay on Bitchute

– This is a village in Jaffrabad district of India where 5G towers were recently installed (around april, 2021).
Within 20 days of installing the towers, 32 villagers died!
Their deaths were quick and unpredictable without prior illness.
Most who died were between 40-50 years old as told by the villagers. The wife of one interviewee died without prior signs in one night.
They demand these towers to be removed else they will burn them down.
Thanks to the genuine reporter who arrived at the scene to report this unconventional story.

INDIAN VILLAGERS CUT 5G TOWER LINES DUE TO MANY DEATHS

-From Satya Vijay on Bitchute

“Leader of the Bhartiya Kisan Union (Indian farmer union) talks to Village head man Jaypal Singh Kundur from Haryana, India.
The villagers are reporting several deaths since the installation of 5G technology and LED lighting in villages across India.

Villagers who have realised this attack are cuttting the 5G tower lines or demanding them to be shut.
These deaths are being counted as covid deaths and are being used by the media for propaganda purposes.
Indian PM has demanded an increase in testing and vaccination across Indian villages in his ‘war on corona’.
Apparently, 5G/high frequency technology towers have already been installed across India, even in far-off villages. These towers are being timely activated to forward the agenda narrative. These soft weapons are the real ‘invisible enemy’ which media never talks about. 5G will be officially rolled out in the second half of 2021 and the trials are now officially going on since April. However, there was a bird flu epidemic in India back in January which was most likely caused by 5G technology/ high frequency radiation.”

For more information, and to learn how you can protect yourself and your baby from electromagnetic radiation, please visit https://honeywire.org/

“One way to interpret this is that we have two guidelines, one to prevent heating and, a more restrictive guideline, to prevent biological effects, some of which can have serious health consequences.

“What is striking is that what we used to call  microwave sickness (group of symptoms associated with radar workers) has been called neuroasthenia (feeling unwell) and is now called electrohypersensitivity.  In all cases the symptoms are associated with exposure to radio frequency radiation initially radar; then RF heat sealers and computers; and more recently various sources of wireless technology including mobile phone, broadcast, and WiFi or WiMax antennas, wireless routers, smart meters, etc.”

“Flying under the radar, so to speak, during the media coverage of the COVID-19 pandemic, is the rollout of a hyper-fast speed 5G wireless network. As millions of Americans are suddenly working remotely, it has proven to be a powerful opportunity for regulators to move 5G forward.

Yet, in the face of expanding wireless connections, a landmark study recommends reducing exposure.”

“The government’s rollout of the 5G mobile network is facing a High Court legal challenge amid safety fears around the new generation of phone masts.”

Washington Post Is Right That 5G Is a Lie, But Wrong About the Reason

“Neville Ray, president of technology at T-Mobile, admits that so far, 5G is “meaningless.”“We celebrated some 5G launches — T-Mobile didn’t, others did — but they’ve proven to be pretty meaningless,” Ray said. “If we’re honest with ourselves, 5G really hasn’t had any real impact in the U.S. materially to date.” His claim that T-Mobile didn’t celebrate 5G launches, however, is contrary to his company’s massive advertising campaign showing 5G radiation coming from cell towers, painted in splendid pink.”

“‘New generation mobile technology, like 5G, could have the main role in constructing various types of viruses, such as Coronaviruses, within a cell,’ says study”

DR. THOMAS COWAN CONNECTS THE DOTS BETWEEN GgGgG AND THE C 0 R 0 N A V1RUS

Dr. Cowan says viruses are the waste from cells that are poisoned. Some of the poisoning comes from electromagnetic fields. Cowan is an American holistic medical practitioner who trained as a physician.

Using the Coronavirus crisis as pretext, Google today announced it will censor discussions of 4G/5G health effects. Google joins the mainstream and social media drive to shutter the 5G movement. Google says it means to stifle a “conspiracy theory“ linking 5G to the pandemic.

Big Data/Big Telecom are using this rumor to muzzle debate about the abundantly documented health harms from wireless.

My written evidence for the Broadband and Road to 5G inquiry, one year ago

I am a member of the public and do not represent any organisation. My motivation for writing originates in my personal experience of ill health and the death from motor neurone disease of 2 neighbours who lived a few meters from a mobile phone tower in Bembridge, next to which I also lived from 2004 to 2007. This has led me to investigate further.

Briefly, I believe wireless radiation from sources such as mobile phone towers, WIFI routers, cordless phones, induction hobs, SMART meters and other SMART technology is harmful to all health, and that 5G will be much more harmful. I believe that I should have choice as to whether I am irradiated or not.

Victor Leach is a radiation health physicist and atmospheric scientist for the past 40 years. Founding member of Oceania Radiofrequency Scientific Advisory Association Inc. (ORSAA). Former Australian Radiation Laboratory (now ARPANSA), and QLD & NT State Health Departments. Former University Radiation Advisor at both the Queensland University of Technology and the University of Queensland. His work on radioactivity exposure has been published in peer-reviewed journals.

“The impacts of 5G/60 GHz are not widely published. Here’s what we know from big telecom company promotional material: “60 GHz has a very distinct impact on none other than oxygen itself.” Yes, articles from companies touting benefits of 5G admit 60 GHz is absorbed by oxygen as seen by this graph.”

“The Court of Appeal of Turin confirms in a full judgment published on 13 January 2020 (904/2019 of 3.12.2019 , Romeo v. INAIL) the decision of the Tribunal of Ivrea of 2017. Judge Fadda considers that the worker’s acoustic neuroma (benign tumour of the head) was indeed caused by the use of the mobile phone.”

“Smart Ambulances said to be killing drivers in the UK. Telstra has invested hundreds of millions of dollars to introduce 5G across Australia, defying warnings from research facilities and the health industry.”

“If you’re wondering why people who live in 5G rollout areas seem to be going insane, it’s not your imagination. 5G radiation causes “neuropsychiatric” effects through a mechanism described as ion potentiation poisoning of brain cells, according to research published in Environmental Research.”

“5G: Health Risks, Surveillance and BioWeaponry” is the presentation given by Lena P at the September 19 , 2019 meeting of the Silicon Valley Health Institute in Palo Alto, CA.”

Doctors, Experts Call for Delaying Deployment of 5G Due to Health Risks

“TORONTO, Canada—Although 5G, or fifth generation wireless technology, promises faster download speeds and conveniences that most of us have never dreamed of, we’ll also be blanketed with a new type of radiation called “millimeter waves,” according to health experts who warn of the rising risks associated with the rollout of 5G.”

“In an appeal to the European Union, more than 180 scientists and doctors from 36 countries warn about the danger of 5G, which will lead to a massive increase in involuntary exposure to electromagnetic radiation. The scientists urge the EU to follow Resolution 1815 of the Council of Europe, asking for an independent task force to reassess the health effects.” 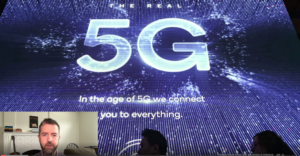 Eight children have been diagnosed with cancer at the same elementary school – prompting parents’ fears that a cell phone tower could be to blame.

The affected students at Weston Elementary School in Ripon are all under the age of 10, each with different types of cancer: brain, kidney, liver and lymphoma.

“Natural health expert and Mercola.com founder Dr. Joseph Mercola interviews Dr. Dietrich Klinghardt on the dangers of electromagnetic fields and how chronic exposure is contributing to the high rates of chronic disease today.”

Council of Europe advice on health risks of electromagnetic radiation

“The Council of Europe, known from the European Convention on Human Rights, published a report on 6 May 2011 under the chairmanship of Jean Huss on the dangers to public health of electromagnetic fields. The committee calls for the lowering of exposure limits.”

My written evidence for the Broadband and Road to 5G inquiry, one year ago

What’s really going on in your 5G phones?